Welcome to our section on Costa Rica birdwatching.

Birders are enormously important to neo-tropical birds. In the U.S. alone, birders spend more than $32 billion a year and the estimates of their numbers range between 40-60 million. With nearly 1,000 species of birds (about the same as the Continental U.S. or Europe), the land named by Christopher Columbus offers some of the most concentrated birdwatching on the planet.

And, while it’s a fun recreational attraction for thousands of travelers, eco birding can be to feathered creatures what eco tourism has done to save the marine turtles at Tortuguero National Park. You may notice that this section of the website has a different structure than other pages.

Fact is, that while birding for these three species will introduce you to potentially hundreds of different kinds that live in the same area (I recommend the book to the left), you’ll not see a scarlet macaw or quetzal where great green macaws live or a quetzal where either kind of macaw hangs out.

Your online Costa Rica birdwatching excursion will take you to Latin America’s first Bird Route—places that you can actually tour and stay in your search for great green macaws.

From there, you’ll head over to the Osa Peninsula where you’ll find scarlets in the place National Geographic calls “the most biologically intense” place on the planet.

Then, it’s on to the cloudforests in the interior of the country to search for one of the most beautiful birds anywhere, the resplendent quetzal.

And, for those of you planning to visit the magnificent Pacific Gold Coast, you’ll find perhaps the finest bird watching of all Palo Verde National Park—sometimes a quarter million birds!

The second largest parrot in the world, the Great Green Macaw (don’t confuse with the similarly named but very different Green Winged Macaw) is found only in and along the edges of the recently created Maquenque Mixed National Wildlife Refuge in the northern part of Costa Rica.

This refuge protects diverse and fragile ecosystems that include wetlands, lagoons, rivers, creeks, and forests (virgin and reforested). The wetlands are unique for the country and of such significance that they are likely to be proposed as Ramsar Wetlands sites of International Importance.

Filled with lots of other animals as well, the refuge is a great place to experience the country’s only Bird Route providing some of the finest birding in Costa Rica.

NEW!!!There’s no place like this in all of Latin America. Today, literally, you can hike to 18 great birdwatching locations encompassing a vast amount and diversity of ecosystems filled with birds (including the highly endangered great green macaw). Learn more here about the Costa Rica Bird Route. 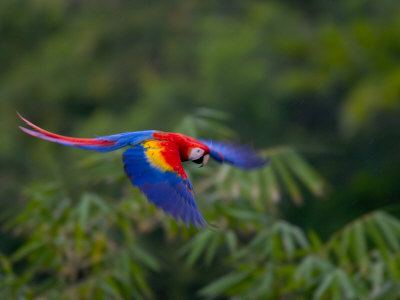 If you’re into fishing, this is a place you might want to try.

Drake Bay Almost exactly the size of New York City, the Peninsula is home to almost half of all the plant and animal species of the country, including the largest surviving population of scarlet macaws click, in Central America.

Combine your Costa Rica birdwatching trip with a wildlife tour to one of the last remaining wilderness areas in Costa Rica, the incomparable 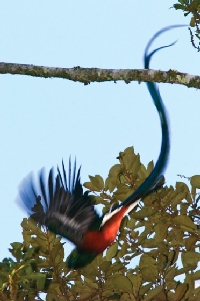 Considered by many to be one of the most beautiful birds in the world, the resplendent quetzal is a creature of the cool mountain highlands and cloud forests of Costa Rica.

Your Costa Rica birdwatching tour for quetzals will likely take you to one of two places in the country, both of which are so unique that they have been voted among Costa Rica Seven Wonders, click. One of these places is south of San Jose in the cool, moist highlands of Mt. Chirripo. Chirripo is the tallest mountain in Central America and its peaks overlook small remnant lakes from the Ice Age.

On a clear day, you can see five volcanoes and two oceans (the quetzals are down in the cloud forests, of course, not the peaks)

The other great place to find quetzals is north of Arenal Volcano in the cloud forests of Monteverde National Park. Newsweek has placed Monteverde #14 on its list of 100 Places to See Before They Disappear and National Geographic has described it as “the jewel in the crown of cloud forest reserves.”

Besides being home to the beautiful quetzal, the Park has 500 species of orchids to enjoy.

Why not combine your Costa Rica birdwatching with a bit of orchid viewing at one of the nearby orchid gardens?

Imagine boating along a slow-moving river, crocodiles lying on the banks and birds—up to a quarter million—of every kind and stripe.

When Christopher Columbus landed along the southern Costa Rica Caribbean coast five centuries ago, its beaches were often alive with enormous numbers of nesting sea turtles and, from (what are now) Nicaragua to Panama, the Atlantic to the Pacific, its mountains and valleys were completely forested. But, throughout the 1970s and 1980s, vast tracts were cut without regard to anything except the desire to create cattle pastures for beef exports. With one of the worst rates of deforestation in Latin America, by 1990 only 21% of the country remained forested.

The mighty eagle was so critically endangered that it neared the point of extinction in Costa Rica.

But, as a clear demonstration that the past need not be the prologue to the future, Costa Rica’s leaders set the country onto a radically different course away from exploitation in favor of conservation, ecosystem preservation and restoration, and sustainability.

It set aside nearly 26% of its land as parks, refuges, and preserves and created an ambitious program of reforestation that has proven so successful that as of 2009, more than 46% of the country was forested.

May the glorious raptor recover!

And, keep in mind that Costa Rica birdwatching, like sea turtle ecotourism, is invaluable if we hope to preserve a precious part of the tropical world.